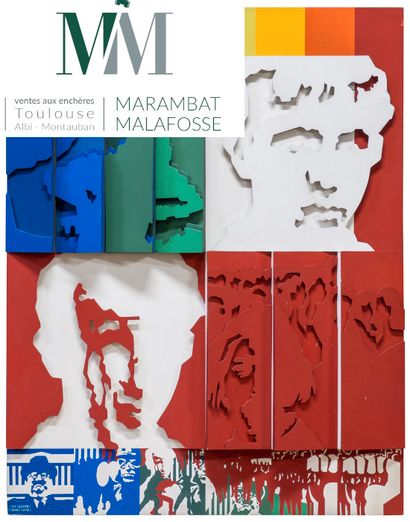 The 70's, a new look at Narrative Figuration

The Figuration Narrative groups together artists from different countries who participate during this decade in the rebirth of figurative painting like Pop Art in the United States.

They find their inspiration in everyday life (television, comics, cinema, the press, current events) and put contemporary society and its images at the heart of their work. But they are different from American artists in their critical and political vision.

In the mid-sixties, Philippe Carré abandoned abstract painting and adhered to the new credo of this movement by creating figurative "relief panels". Made of cut out wooden plates, painted in acrylic, they brace and superimpose silhouetted characters and scenes taken from press photos, to represent in final compositions, the temporal and sequential dimension of a narrative in the manner of a comic strip or a film.

If Philippe Carré's paintings are works of communication and protest, they are also works of contemplation and representation.

Like his contemporaries of the Figuration Narrative, the subversive potential of Philippe Carré's works lies more in their aesthetic dimension, which runs counter to the didactic and militant inventory of Socialist Realism.

Philippe Carré was born in Paris in 1930.

After his military service, he studied in Paris with the fresco artist Robert Lesbounit and the sculptor Henri-George Adam.

From 1955 to 1961, he made stained glass windows in the Boudzen workshops in Arcueil. From 1965, he devoted himself to the scenography of several theatrical shows after having obtained the prize of the Biennale of Paris. In 1969, he opened in Arcueil, where he lived until 1981, a school for teaching drawing and painting.

He designed his first relief panels in the spirit of Narrative Figuration.

In 1976, he was appointed professor of plastic arts at the U.P. of Architecture in Bordeaux, where he taught until 1994.

Commissions realized in the framework of the 1% architectural

With your consent, we would like to use cookies placed by us on this site. Some of these cookies are strictly necessary for the smooth running of the site. Others are used to:

Your consent to the installation of non-strictly necessary cookies is free and can be withdrawn or given at any time.

By allowing these cookies, you agree to the deposit, reading and use of tracking technologies necessary for their proper functioning.
Read more about our privacy policy.